Is There Good From Making Mistakes

We all make mistakes. But the difference in us all is how we handle the mistake.  Some take their mistakes and learn from them and move on.  While others let their mistakes stop them in their tracks. 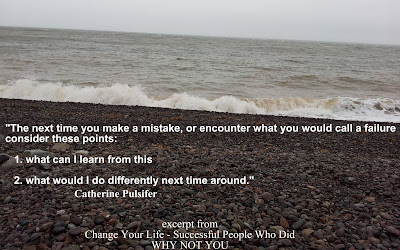 I don't think there is anyone who is successful that has not made mistakes. If you doubt this just take some time and read a biography of a successful person, or research them on the internet.  You will find that a key to success is making mistakes.

Take your mistakes and learn from them!
Posted by Unknown at 10:38 AM 1 comment:

The year ends – look back:
- What have you accomplished?
- What challenges did you face?
- What are your happiest memories?

A new year begins – look forward:
- What do you want to accomplish?
- What will you learn?
- What will make you happy?

Never doubt that you are capable of being more than you are currently.  Look at people who have achieved success – were they successful on their first try? No. In most cases, they faced failures, challenges, and disappointments.  But, they went on to achieve success.

What About YOU?
Posted by Unknown at 11:42 AM No comments:

Three years ago, I met an individual, who we will call Jeff, who was complaining about his financial situation in life.   Jeff worked 40 hours a week, had been at his job for the last 15 years, but was still only making an income of just above the poverty limit.

I always feel bad for people who are having difficulty making ends meet. So I talked to him about his job, and asked him what things he did to advance himself forward.  I was amazed to hear him say, "why would I do anymore."  Of course I was taken back by his response.  So, being a person who loves helping others I went on to explain that doing more or learning more may help him earn more.  He seemed upset with my answer and responded to me, "it's just a job, it won't matter if I do anymore."

So realizing this approach didn't work with him, I then questioned him about what things he had a passion for.  You see, Jeff is only 10 years from retiring.  I suggested that whatever his passion, if he started doing it now it would help his financial situation, and also give him something to do when he retires.  He could start building it now and then when he retires, he could work at it part time.

But, much to my disappointment, he responded that he had no passion and when he retires he is going to do nothing.  But, in the same breath, he talked about the need to make more money now.

Albert Einstein's quote came to my mind:
"Insanity:
doing the same thing over and over again and expecting different results."

I realized that until Jeff changed his attitude, there was nothing that I could say or do that would help him.  Jeff was doing the same thing over and over again, expecting to make more money but not willing to change the way he did things!

If we do not have the success we want in our lives, but we are not willing to change what we are doing, then success will never be found.

A complete opposite of Jeff was Barry

A very similar issue with the exception Barry was in his early 40’s with a young child.  For years, Barry just drifted along, going from job to job, just making ends meet.

When I met Barry, he had just enrolled in a course that would take him a couple of years to finish.  But the education he was receiving, would allow him to look for work that paid more; it provided him with a trade.

When I questioned Barry about why he was doing this, his response was one that I will always remember.  He said, "If I keep doing what I am doing now I will always just make ends meet."

Now 3 years later, Barry finished his course, has a much better job, and yes, his financial situation is very different.  As for Jeff, well you guessed it, he is still complaining about his situation and nothing has changed.

And if you think that Jeff and Barry had different intellectual backgrounds, they did not.  But one person who did have a very different background was Albert Einstein.  He had speech difficulties in his early years.  His family seen their share of issues - his father declared bankruptcy.  But, Einstein was a success, as we now know. To see the type of man and the type of attitude he had, read the following quotes by Albert Einstein:

"A person who never made a mistake never tried anything new."
"We cannot solve our problems with the same thinking we used when we created them."
"It's not that I'm so smart, it's just that I stay with problems longer."
"Once we accept our limits, we go beyond them."

I would suggest that if you are not happy with your current situation then take action, change the way you are doing things! Study people who have been successful, let them be your inspiration.  Do not keep doing what you have always done!
Posted by Unknown at 2:51 PM 1 comment:

This Is Your Life 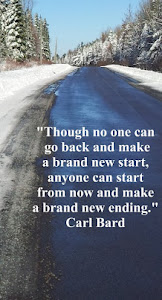 "Many of life's failures are people who did not realize how close they were to success when they gave up."
Thomas Edison